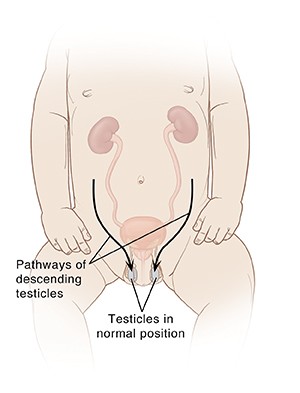 2. How does the testes normally develop and how does it reach the scrotum (Bag of skin hanging behind the penis)?

Testicles form in the abdomen during fetal development. During the last couple of months of normal fetal development, the testicles gradually leave the abdomen, pass through a tube-like passageway in the groin (inguinal canal) and descend into the scrotum. If the above process was stopped or delayed then it results in undescended testes.

3. What will happen to the testes that have not descended?

The good news is for most boys born with one or two undescended testicles, the problem corrects itself within the first few months of life. If the undescended testicle doesn’t correct itself, surgery can be done to bring the testes down into the scrotum.

4. How can the undescended testes detected?

An undescended testicle is typically detected when your baby is examined shortly after birth.

5. How long can we wait for the undescended testes to correct itself?

If the testicle hasn’t moved into the scrotum by the time your son is 4 months old, the problem probably won’t correct itself. You need to see your doctor to decide the further course of action after this time period

6. Why should we worry about undescended testes?

Treating undescended testicle when your son is still a baby may lower the risk of complications later in life, such as infertility (Not able to produce sperm) and testicular cancer.

Yes it can happen in older boys as well. Some times normal older boys who had normally descended testicles at birth may appear to be “missing” a testicle later.

This can be due to any of the following reasons

The exact cause of an undescended testicle isn’t known. A combination of genetics and other environmental factors may disrupt the hormones and physical changes in the Fetus and cause disruption in the normal descend of the testes.

Some of the known risk factors are

9. What are the complications due to undescended testes?

In order for testicles to develop and function normally, they need to be slightly cooler than normal body temperature. The scrotum provides this cooler environment. Until a boy is 3 or 4 years old, the testicles continue to undergo changes that affect how well they function later. If the testes remain inside the abdomen and not in a cooler environment, this might increase the risk of complications later in life like:

10. What are the tests to be done for my child to evaluate undescended testes?

The goal of further tests is to locate the position of the testicle and monitor changes in its position. If the testicle is in the groin, your doctor may be able locate it by touch. If it can’t be felt (non palpable), then he might order one of the following tests:

Other tests may be needed in rare occasions, If your infant has two non palpable undescended testicles, your doctor may order the following tests to determine the sex of your child, to check the possibility of ambiguous genitalia.

11. How is Undescended testes corrected or Treated?

The goal of treatment is to move the undescended testicle to its proper location in the scrotum. Early treatment may lower the risk of complications of an undescended testicle, such as the risk of infertility and testicular cancer. Generally the baby has to be monitored for normal descend of the testes to happen which usually happens in the first few months of his life. If the testes dose not descend down naturally on its own, then He has to undergo surgery.

Surgery :This procedure usually requires relatively small incisions and may be performed with laparoscopic devices. The surgeon carefully manipulates the testicle into the scrotum and stitches it into place.

12. How long do I need to wait for the testes to descend normally and when should the surgical option is to be considered?

Usually the testes will descend in the first 3-6 months and if it did not descend during this time period then the chance of the testes to descend is very less. So the surgery is usually done between 3-6 months of age, and in any case it should not be delayed beyond15 months of age. Early surgical treatment appears to lower the risk of later complications. In rare cases, the testicle may be poorly developed, abnormal or dead tissue. The surgeon will remove this testicular tissue.

13. What to do after surgery is done?

After surgery, you need to follow up with your pediatrician to check whether testis is normally developing, functioning properly and stay in place.

If your son doesn’t have at least one healthy testicle, your doctor will refer you to a hormone specialist (endocrinologist) to discuss future hormone treatments that would be necessary to bring about puberty and physical maturity.